Which EGWP Medicare Plan is Right For Me?

Determining which EGWP Medicare plan can be difficult.  With the recent changes in the Patient Protection and Affordable Care Act (PPACA) taking effect in 2013, the right Medicare Part D group retiree prescription plans may not always be easy to choose.  The differences in which retiree prescription plan to choose when switching from the previous RDS to an EGWP program are subtle but can have a big impact on large self funded organizations.  The main difference is that while RDS paid 28% of plan costs, an EGWP takes advantage of the Medicare Part D group provision for the Coverage Gap Discount.  The 50% discount is given by the pharmaceutical companies on the most popular brand name drugs.  In addition, EGWP plan providers, who are contracted directly with the CMS also alleviate the majority of the administrative burden for managing the program. 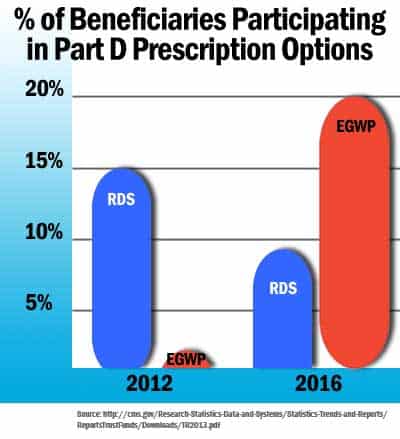 According to the most recent CMS Medicare Trustees Report, RDS enrollment will decline as a % of beneficiaries covered.  Alternatively, because of the many advantages that organizations, both public and private, can extract from Employer Group Waiver Plans, the CMS forecasts that EGWP’s will be on a sharp rise, covering nearly 1 in 5 Medicare beneficiaries by 2016.

There are two choices for self funded organizations that presently have enrolled in the CMS sponsored retiree drug subsidy (RDS) program and wish to take advantage of more favorable savings provided by Employer Group Waiver Plans.

First, there is the 800-Series EGWP.  This is when a third party administrator holds the contract with the CMS on the plan sponsor’s behalf.  The plan sponsor then pays a flat premium for either a product that is customized to their needs (typically a larger organization) or one that the TPA has designed to fit the needs of smaller companies with less customization of benefits.  The 800 series EGWP can also be constructed to be either fully insured (+wrap) or self-funded.  These options are offered by private companies such as Pharmacy Benefits Managers (such as ExpressScripts) or health plans.  The plan manages compliance with CMS regulations regarding Part D plans.

By using a TPA, plan sponsors alleviate themselves of the majority of the administrative duties involved in managing the program.  This means no more actuarial tests, no more having to submit lengthy paperwork to the CMS and no more hassles with formularies as well as handling enrollment of retiree’s and communication about the plans workings and benefits.  The TPA also maximizes savings for the sponsoring company in working to ensure that all subsidies are applied.  By using an 800-series EGWP the sponsoring company is also transferring risk to the TPA.

One of the main benefits of an 800 Series EGWP Medicare plan is that the organization can group enroll its retirees into a stand alone Prescription Drug Plan (PDP), this was not previously allowed for recipients of the RDS.  Alternatively, the organization can elect to group enroll its retirees into an integrated medical and pharmacy Medicare Advantage Prescription Drug Plan (MA-PD).  In this way plans can be designed with no interruption of delivery of prescription benefits and usually means the retiree only has to have one card.  Furthermore, the plan can be customized for the groups needs in terms of special circumstances.

800 Series EGWP plus Wrap – Is Coinsurance the way to go?

To maximize savings, organizations can opt for an EGWP + Wrap program.  This consists of a EGWP without gap coverage for brand name drugs plus a commercial wrap product to provide the missing coverage.  In this way, the 50% discount is applied to the gross cost of the drug for all EGWP plans, greatly increasing the discount impact.  EGWP +wrap plans are becoming the most used alternative to traditional Medicare Part D RDS subsidies for retiree prescription benefits plans.

From the retirees perspective, an EGWP is transparent.  The retiree should notice no difference in the delivery of the benefit.  The Part D benefit also provides for catastrophic coverage should the retiree enrolled in the EGWP Medicare Plan spends $4,350 in total retiree out of pocket expenses (TrOOP).  This means that the plan enrollee would only pay a 5% coinsurance on their prescriptions.  While the enrollee is in the Medicare  Part D donut hole (where they are between $310 and $4,350 TrOOP) the plan is reimbursed at 50% of the cost of the prescriptions, and the retiree pays 47.5% coinsurance for brand name drugs, and 72% coinsurance on generic prescriptions.  But because the drugs are discounted 50% to begin with, the plan pays less and the retiree sees no difference (i.e. higher cost) at the pharmacy counter than they have normally experienced.

Adding a commercial wrap (EGWP +wrap) insurance plan can further reduce risk as well as add additional formularies that may not be included in the CMS plan.  For a fuller explanation of an EGWP +wrap and how your organization or your clients can take advantage of this, please contact us here or review the EGWP +wrap comparison chart below that explains the benefits of an EGWP +wrap in an example retiree drug payment comparison. 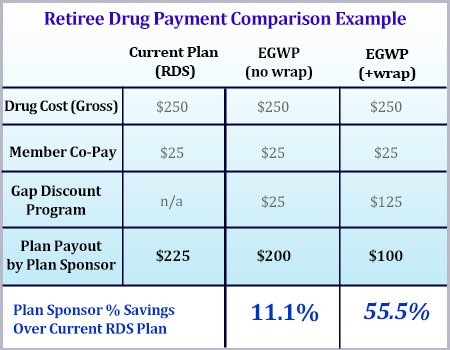 For more information regarding the benefits of an EGWP plus insurance wrap plan, please contact one of our retiree benefits consultants to discuss you specific population and organization’s unique needs.

Alternatively, there is also a Direct Contract EGWP option

Under a directly contracted EGWP, employers and union groups contract direct with CMS to supply plan benefits and receive subsidy payments directly from the CMS. The subsidy, which is pre-tax is determined by the national average bid amount, which is less than the part D base beneficiary amount.

There are advantages to a direct contract EGWP.  A plan sponsor has greater control over the benefits design and process.  Another involves the creditable coverage test (which also applies to 800 series EGWP as well).  This is where under Part D the group benefits are equal to or greater than what they would be under individual benefits through Medicare Part D.  The requirements that have to be met are simpler.  In a direct contract EGWP there are no COB issues to deal with (which is unlike the +wrap option).  As with 800 series EGWP’s, there are provisions low income premium payments as well as catastrophic reinsurance coverage for those who exceed the maximum TrOOP.

Probably the most attractive benefit of a direct contract EGWP is the cashflow.  Unlike RDS payments which are paid annually, the direct contracted EGWP plan sponsor is paid at the beginning of each month.  They can use the cash to pay pharmacy or other costs that may be coming due.  In addition, with direct contract EGWP’s, the plan sponsor because it is direct is not beholden to another company such as a PDP or PBM that may have a waiting or clearing period.  The difference between this and an 800 series EGWP +wrap is that the cash from the Coverage Gap Discount is paid directly back to the company.  With an 800 series EGWP +wrap plan, the plan sponsor pays the money for the premium and their discount is calculated in the form of a reduced premium.

There are downsides to this approach though, as a direct contract EGWP does not remove the risk as does an 800 series EGWP +wrap plan does.  In other words, there is no wraparound on costs.  So if a retiree population experiences unusually high amount of specialty drugs that was not forecast then the plan sponsor could find itself behind on monies to pay prescription costs.  Another pitfall is that the plan sponsor must assume all administrative duties for this type of plan.  This can translate into higher operational costs.  The CMS requires a great deal of reporting associated with this type of EGWP Medicare Plan.  Companies and unions with over 3000 enrollee’s should weigh heavily the advantages that having a TPA administrate their program can bring to the table.

Since Jan. 1, 2013, RDS subsidies are no longer tax exempt.  This feature made them extremely attractive to organizations both public and private.  But removing the exemption has also led to the increased flow of organizations moving to an Employer Group Waiver Plan.  Pubic employers, such as municipalities, state governments and other not-for-profit organizations are still tax exempt, but can still save money with an EGWP.  Organizations subject to GASB Statement 43/45, which affects public employers, must put a number on their balance sheets for the long term obligation of providing prescription benefits to their retiree’s.  How this “number” is calculated is still a bit of a debate, but EGWP’s offer a more stable number than RDS subsidies which can sometimes not reflect the toal liability an organization has.  An EGWP pushes a higher share of the pharmacy benefit costs to the federal government (via the CMS) thus effectively lowering the plan sponsor’s tax liability.

For more on the tax issues, please refer to an excellent OPEB Liability article in Benefits Magazine.

Which EGWP Medicare Plan Is Your Choice

Both the 800 series EGWP, and the option to include wraparound insurance, as well as direct contract EGWP options have their plusses and minuses.  It will take careful review and audit of all the factors that are unique to your organization or plan client (if you are a broker).  There are many inputs and considerations to take into effect when deciding on which EGWP Medicare Plan your organization’s unique population will benefit most from.

For a non-sales, no obligation free analysis, please contact one of our experienced retiree prescription benefits plan consultants by using the form located by clicking here, or the form located directly below.